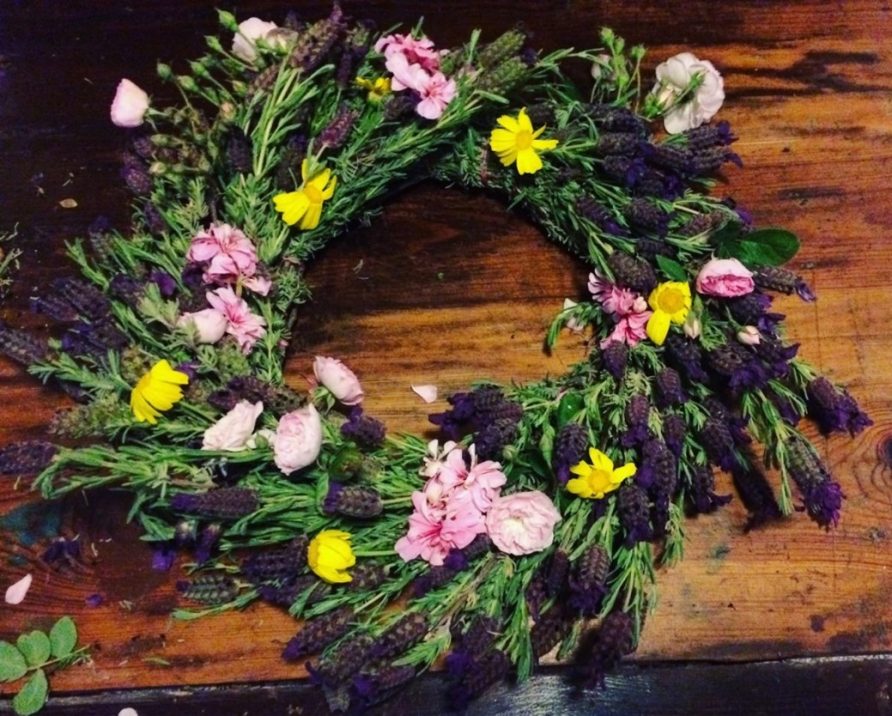 The flowering season and a breathtaking hike on Rhodes

The intoxicating flowering season of Rhodes

May has arrived, the month when the wildflowers, the jasmine shrubs, the olive and pomegranate trees, the Caper bushes by the sea coasts, the Asphodel and the signature herbs of the Greek islands are in full bloom.

On Rhodes island, April and May are the two months when Mother Nature is singing Her love songs through the blooming landscape. These months are not only visually intoxicating ones, but when taking a deep breath, the fragrance of the sea breeze, the blooming herbs and the rejuvenated pine forests delight your whole spirit.

The emanating essential oils of the blooming Mediterranean herbs like sage, wild lavender, oregano, and wild thyme are agents of otherworldly messages for the human soul. These blooming flowers – the love song of Gaia – are manifestations of Eros, the Greek God who „was the uniting power of love, which brought order and harmony among the conflicting elements.”(source)

May is still a month when Greeks usually greet each other with the message of Easter: Christ is Risen! This month is still about the celebration of life, renewal, the victory of light and a testimony to newness.

The flower ritual of ’Protomagia’

This time of the year possesses several local folk and religious customs in Greece that involve certain flowers and herbs. Probably the most wonderful flower ritual I know is on the 1st of May, or ’Protomagia’ as the Greeks call it. Every year on that day, young girls and women go out to the meadows to collect wildflowers, and while enjoying a picnic, they create wonderful May Wreaths. Later they hang the wreath on the entrance of their home. This custom already existed in ancient Greece, where people wore flower wreaths and decorated their houses with them around this time of the year.

The month May got its name from the nymph Maia, the eldest of the seven ’Pleiades’ (the mountain nymphs of ancient Greece), and she was also the mother of Hermes. When Orion consumed them, Zeus placed the seven sisters on the sky, so they became the star constellation Pleiades – which means ’The Ladies of Plenty’. Maia was called “the nursing mother” and was occasionally identified with Gaia (the goddess of the Earth). When we look at the colourful, vibrant, fragrant lands of Rhodes in May that provide plenty of nourishment for bees and other pollinators, we understand the nursing, mothering message of this month.

Whether you wish to create your own May Wreath or simply want to worship the enamoured, nursing island landscape of Eros and Maia, there is no better time for hikes and long walks on Rhodes island than in May.

Oh, and one more reason to visit Rhodes in May: the International Museums Day is annually on the 18th of May, which means free admissions to several museums and archaeological sites!

– from Trianda village up to the ancient acropolis of Ialysos

If you don’t have time for more than one hike during your holidays on Rhodes, I highly recommend choosing this one. As a reward for this two-kilometre-long uphill walk (besides the breathtaking fertile vegetation), you’ll get a bit of a taste of each historical period of Rhodes by reaching the area of an ancient acropolis on the top of Filerimos hill. This hill was used for religious reverence through all the ages. And not only the hill itself but the whole surrounding area bears a very rich, long human history that deserves a bit more attention.

The historical footprints of this landscape

The 267-meter high hill of Filerimos – covered by an abundant coniferous forest – stands right behind the modern age Rhodian village of Trianda, which was renamed Ialysos in 1976 and became a densely populated town by the 2000s due to the explosion of mass tourism.

Ialysos (or Trianda) is located between Diagoras Airport and Rhodes Town on the island’s northwestern coast, and its seashore lies the closest to Asia Minor. Because of this gifted geographical position and its fertile natural environment, this area records the earliest prehistoric proto-urban settlement of the island (Asomatos) from the 3rd Millenium BCE.

Minoan and Mycenaean style frescoes, pottery remains and tombs proved the continuity of a flourishing, peaceful, self-sufficient society with a culturally open sea trader elite on this landscape up until the 13th century BCE.

After the Greek Dark Ages, in the 8th century BCE, the ancient Dorian city-state of Ialysos started to emerge here with an acropolis on the Filerimos hill. Ancient Greeks of Ialysos built their temples at the highest peak of Filerimos, and their latest known temple was a great sanctuary of Athena Polias, the virgin patron goddess of the city, wisdom, crafts and war.

The sea-born Rhodians (besides the earth-born Athenians) had their strong and unique Athena cult since Classical times, and they built her sanctuary on every acropolis (Ialysos, Lindos, Kameiros and later in Rhodos).

“Gold rained on the island [of Rhodes] at the time when Athena was born”, – wrote Strabo in his Geography, referring to Rhodos’ special connection with Athena.

The currently visible partial ruins of the Athena Temple of Ialysos was built around the 3rd-2nd century BCE above an older temple, of which 9th-6th century BCE votive objects can be visited in the Archeological Museum of Rhodes.

I mentioned partial ruins because Christians destroyed the Athena sanctuary around the 6th century AD in order to build an Early Christian three-aisled basilica exactly on the top of the ancient temple using its own materials. And guess who they dedicated the basilica to? To the Virgin Mary, the chaste female saint of Christianity. Covering the actual temple and the cults of the pagans, early Christians consistently built a church of an analogue saint of theirs.

On the locations of Athena (or other female deity), temples Christians tended to build a church for the Virgin Mary. The same happened in Lindos and on the famous pilgrim hill of Tsambika, where ancient Greeks had the sanctuary of Eileithyia, the goddess of human conception and childbirth. And the Greek Orthodox tradition carried on with the same Christian saints of these early churches until today.

At the very same location in the 10th century, Byzantine faithfuls built their own aisleless church too. So did the Crusaders of Saint John – the invaders of Rhodes in the Middle Ages. They built two chapels here in the 15th century where they kept and revered the famous miraculous Byzantine icon of unclear origin: ’Our Lady of Philermos’.

It was an icon worshipped by both Western and Eastern Christians, and it finally left the island with the Knights in 1522 after the fall of Rhodes. The Crusaders attributed their long successful defence of Rhodes to the icon, and they treated it as their most precious possession. The present-day church of Filerimos owns only a copy of this icon, and the original one is exhibited currently in the National Museum of Montenegro.

In the 15th century, the Crusaders decorated the tiny Byzantine chapel of Agios Giorgos Chostos (which is located a few meters west of the ancient temple) with colourful western-style wall paintings (but with Byzantine painting traditions!) depicting the passion and the life of the Virgin Mary, and the Knights with their patron Saints.

The Ottomans destroyed the main church complex on the top of the hill and used this site solely for military purposes due to its 360-degree panoramic view and its strategically safe location.

The Italian conquerors of Rhodes (between 1912 and 1945) restored the monastery of Filerimos (which is a popular place for weddings and baptism ceremonies by present-day Rhodians), excavated the remains of the Temple Athena Polias and the nearby Dorian fountain-house, they created the Golgota path of Filerimos with reliefs depicting the Passion of Jesus that leads to a popular panoramic viewpoint. (This is the hilltop where a huge concrete cross stands – you have probably seen it from the plane while landing on the island.)

There is a huge meadow between the hill and Trianda where you can collect your wildflowers for your May Wreath.

Parking is possible at both locations, and buses are pretty frequent between Rhodes Town and Ialysos (Trianta) if you have no vehicle.

You must have your eyes wide open in order to find the beginning of the steep, narrow ancient path very close to the fire station (don’t confuse it with the long, winding asphalt road). Once you find the path, your reward will be the breathtaking natural environment of the pine forest with its local characteristic herbs, wildflowers and shrubs.

You will be able to observe all the ingredients of the healing herbal liqueur made by the 20th century Capuchin monks of Filerimos: ’Sette Erbe’, or Seven Herbs. They created this unique local spirit by collecting and mixing seven herbs of the pine forest, including oregano, thyme, sage and wormwood, and three more…

The ancient path consists of two parts. Just follow the asphalt road uphill once you have done the first part. In the first hairpin bend of this asphalt road, take the off-road path on your right hand, and after that, immediately turn left uphill to start the second part of the steep, narrow ancient path of the forest.

This section of the ancient trail will lead you up to an old narrow asphalt road that you should follow uphill (right direction). At the hairpin bend of this old road, you will see a fountain with fine engravings of a cypress tree and flowers (most probably from the Ottoman period).

When this old road reaches the main asphalt road, you can continue uphill along the main road. After a 10 minute walk, you will arrive at a huge parking space right next to the acropolis.

You will see here:

I hope you will enjoy the time travel of this little journey and soak up the beauty of Rhodian nature on its zenith in May.

Don’t forget to tell us about your journey on Rhodes in the comment section. We would love to read about your experiences!

And if you have never been to Rhodes, don’t hesitate anymore, book your accommodation NOW!

Written by Mariann Lipcsei Ilios Art  / May 2022 / Copyright © / Unauthorized use and/or duplication of any content of this material without express and written permission from this blog’s author is strictly prohibited.